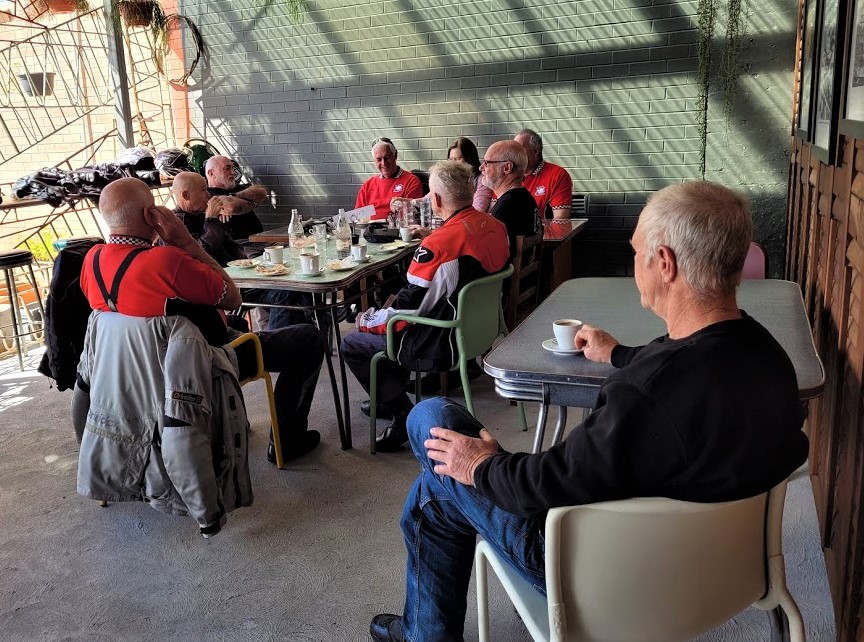 No worries about selecting a ride leader as I volunteered…….what a change and dare to be different. Anyway, during the previous week Mara and I discovered a sort of coffee shop in Port Kembla – Arthur’s Food Store – found their home-made goodies/delicacies to be beyond reproach. So, suggested we go there and obviously there was no dissent – probably because no one else wanted to be the day’s guinea pig.

So, eleven riders and one pillion set off heading south – not too many ways to go so down the OPH, RNP, Broughton Pass, Picton Road and onwards. See the Album here.

Initially the plan was to go down Mt Keira but, as for all plans little things can go askew and as time was slipping by Mt Ousley appeared to be the obvious and righteous alternative. This decision was augmented by the fact that one of the troupe decided to go straight ahead instead of veering left. Again, great work by our resident TEC – the memorable TT managed to pull his finger out and chase down the errant culprit.

Finally, into Port Kembla we trundled only to find a scarcity of parking opportunities. This meant we ended up parked higgeldy piggeldy along Wentworth Street. Unfortunately, this caused some having quite a walk to the selected venue – who said we don’t get enough exercise!

In the end we all managed to congregate at Arthurs, and I quite enjoyed myself as I hope the others also did, After the usual banter it was time to head home. Believe most chose various routes and hope all made it safely to their abodes. As always, thanks for the camaraderie and company.